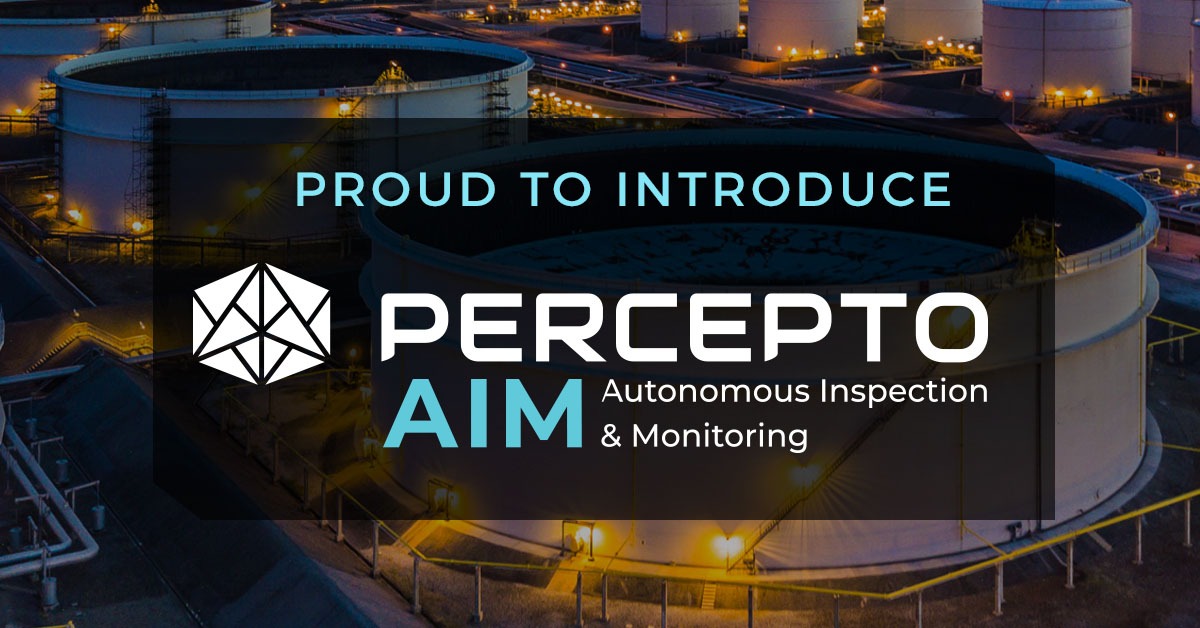 Evolving their advanced drone-in-a-box solution to the next level, Percepto’s Autonomous Inspection & Monitoring (AIM) platform sets a new standard for how critical infrastructure and assets are monitored, end-to-end, paving the way for the remote operations center of the future. Operating a fleet of third party robots alongside their autonomous Sparrow drone, Percepto AIM provides visual data management and analysis to report trends and anomalies and to alert of risks. Any member of staff can request data and Percepto AIM will deploy the most suitable robot independently without human accompaniment to retrieve and stream the required data. The platform also seamlessly reports to assess risk, minimize downtime, drive efficiency and reduce operational costs without human intervention.

“Our customers, which include some of the world’s leading utility, oil & gas sites, mining and other critical infrastructure facilities, are eager to fully embrace automation across their operations and reap the benefits of driving efficiency, reducing costs and safeguarding staff. We’re excited to be the first to empower our customers with truly autonomous inspection and monitoring, driven by the management of multiple visual robotic data sources together with other visual sources including piloted drones, CCTV and mobile cameras, on site or remotely,” said Dor Abuhasira, CEO and Co-Founder Percepto, “We’re delighted that our investors have recognized the growing need in the market for autonomous inspection which is in demand now, more than ever.”

“We believe Percepto AIM addresses a multi-billion-dollar issue for numerous industries and will change the way manufacturing sites are managed in the IoT, Industry 4.0 era,” said Chase Koch, President of Koch Disruptive Technologies. “Percepto’s track record in autonomous technology and data analytics is impressive, and we believe it is uniquely positioned to deliver the remote operations center of the future. We look forward to partnering with the Percepto team to make this happen.”

Spot is an agile mobile robot developed by Boston Dynamics that navigates terrain with unprecedented mobility. Percepto has integrated Spot with AIM for the robot to automate inspection rounds completely controlled remotely via the platform. Spot carries Percepto’s payloads for high resolution imaging and thermal vision to detect issues including hot spots on machines or electrical conductors, water and steam leaks around plants and equipment with degraded performance, with the data relayed via AIM. 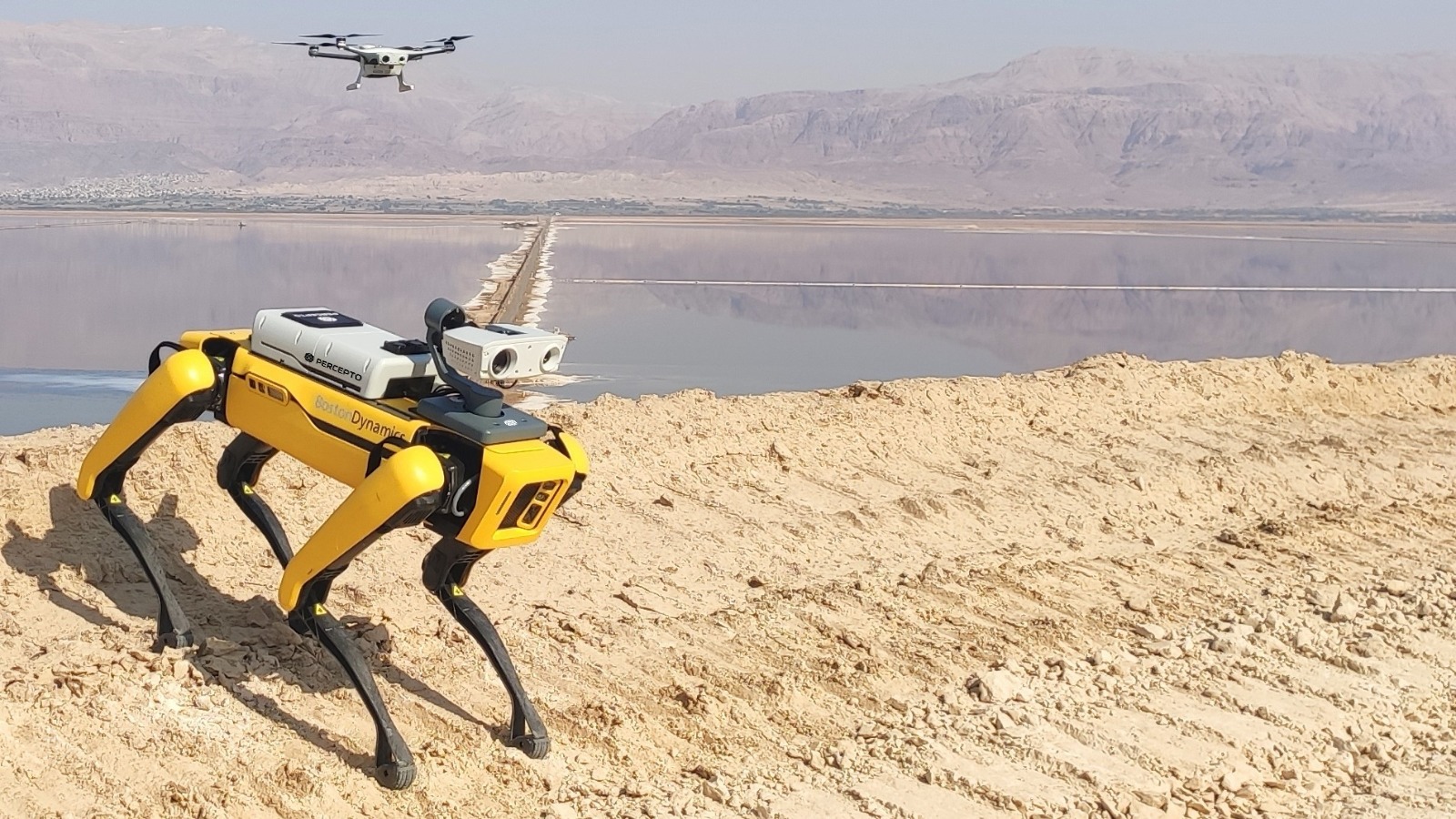 “Combining Percepto’s Sparrow drone with Spot creates a unique solution for remote inspection,” said Michael Perry, VP of Business Development at Boston Dynamics. “This partnership demonstrates the value of harnessing robotic collaborations and the insurmountable benefits to worker safety and cost savings that robotics can bring to industries that involve hazardous or remote work.”

ICL Dead Sea, a leading global speciality potash, mineral and chemicals company, has been operating Percepto’s drone-in-a-box solution to carry out inspection, safety and security missions at its operations at the Dead Sea site, and were the first to fly beyond the visual line of sight (BVLOS) in Israel.

“With Percepto’s AIM, we can now live stream all of our missions and no longer have to be physically present on site to control decisions regarding maintenance and operations. Wherever we are, we know exactly what is happening on site,” said Shay Hen, ICL Dead Sea Drone Program Manager. “We are looking forward to examining the integration of additional robots such as Boston Dynamics’ Spot onto our site for holistic inspection capabilities beyond aerial inspection.”

Percepto is at the forefront of redefining how industrial sites and critical infrastructure are holistically  inspected and  monitored, harnessing remote robotics to autonomously collect, aggregate and analyze visual data.

Founded in 2014, Percepto’s solutions are trusted by Fortune 500 customers in more than 10 countries including ENEL, Florida Power and Light and Verizon.  The company is the recipient of the Frost & Sullivan Global Enabling Technology Leadership Award.

Koch Disruptive Technologies (KDT) is a unique investment firm, focused on empowering founders to create a could-be world. KDT provides a flexible, multi-stage investment approach which includes both traditional venture and growth stages. We work with principled entrepreneurs who are building transformative companies, disrupting the status quo, and creating new platforms. KDT is a subsidiary of Koch Industries, one of the largest privately held companies in the world with $110 billion in revenue and operating in more than 70 countries. KDT helps its partners unlock their full potential by bringing Koch’s capabilities and network to them, structuring unique capital solutions, and embracing a long-term, mutual benefit mindset. For more information, visit www.kochdisrupt.com.