The Inflation Reduction Act of 2022 (IRA) – commonly called the climate bill – passed in August 2022 is the largest investment in climate action ever made in the United States. The bill aims to fight climate change on two fronts:

In such, the bill includes massive budgets both for reduction of methane leaks and for renewable energy such as solar power. Beginning in 2024, and growing progressively higher in the subsequent three years, the bill mandates “waste emissions charges”, which are essentially fees for excessive fugitive methane gas emissions. These fines could potentially cost Oil & Gas companies millions of dollars, posing a significant challenge to producers and pipeline operators throughout the United States. Companies must remain compliant to avoid fines, but they must do so without incurring a staggering increase in operational expenses.

Leak detection is notoriously slow, inefficient, and costly. Since many refineries have upwards of 70,000 parts that need to be inspected, there is no efficient way for any person or team to cover them all on a regular basis. Furthermore, not all parts are safely accessible. These limitations impede the frequency, quality, safety and consistency of methane leak inspections.

Even when a leak is detected, companies don’t always have the capacity to accurately identify and repair leaky infrastructure in real time as required by the new US climate legislation. When an on-site sensor detects a leak, pinpointing the location of the leak and what’s causing it is like finding a needle in a haystack. And if the exact location of the leak is unknown, they may be forced to empty an entire tank, or shut down a large section of pipe, which leads to hugely expensive, lengthy downtime. Furthermore, employees can be exposed to the leaking gas in the detection and remediation process.

Due to the inherent limitations, some companies have advanced to inspection using drones with OGI payloads. A drone can inspect a typical refinery in a few flights and see any emissions from the air. However, although they are faster than ground inspections, provide an aerial view, and enable access to hard-to-reach areas, piloted drone inspections don’t address all the issues detailed above. In most cases, they are operated by third-party providers who survey a given site quarterly, semiannually, or even annually. That simply isn’t frequent enough to offer real-time leak data or catch problems before they shut down operations, both of which are necessary to avoid the new fines. 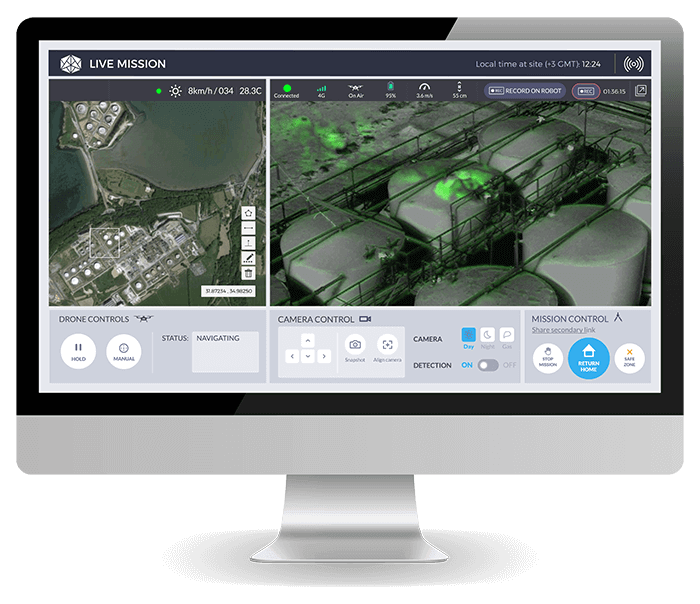 Autonomous drones collect high-resolution footage to identify the precise location of a leak, without the need to empty a tank or seal off large sections of pipe, saving significant downtime. When integrated with advanced software and AI, they can even generate automated real-time reports and alerts about temperature anomalies and visibly identifiable faults.

Emissions control is only one part of the new legislation—in order to achieve the end goal of net zero emissions, clean energy production must also be increased. Therefore, the climate bill also includes significant incentives to ramp up the construction of solar farms. To contribute to these green energy goals, major solar companies are looking for ways to scale up and manage numerous, large-scale construction projects simultaneously. They need to ensure that solar farm construction meets timelines and regulations, however, project growth is out-scaling the worker pool. This presents a challenge for the solar companies, as they don’t have visibility of each site and it is difficult for them to assess the progress of each project in the field. Since delays to solar farm construction projects typically end up costing 20-25% of the total project cost, real-time visibility is essential to keeping construction on track.

When third-party contractors don’t adhere to regulations and standards, it can lead to massive additional expenses. For example, at one energy site, an area wasn’t appropriately cleared before construction, which later caused flooding in a neighboring residential area. The construction company was ultimately deemed responsible. Full visibility is critical to upholding all quality standards and regulations and avoiding costly mistakes.

Percepto supports visibility with an advanced, automated software solution for monitoring and tracking solar construction. Using AI, it provides daily progress reports including accurate counts of each component installed, comparisons of actual construction to plans (as-built vs. planned), a geospatial map with a timeline, and a dashboard that makes it easy for companies to monitor multiple projects at once. 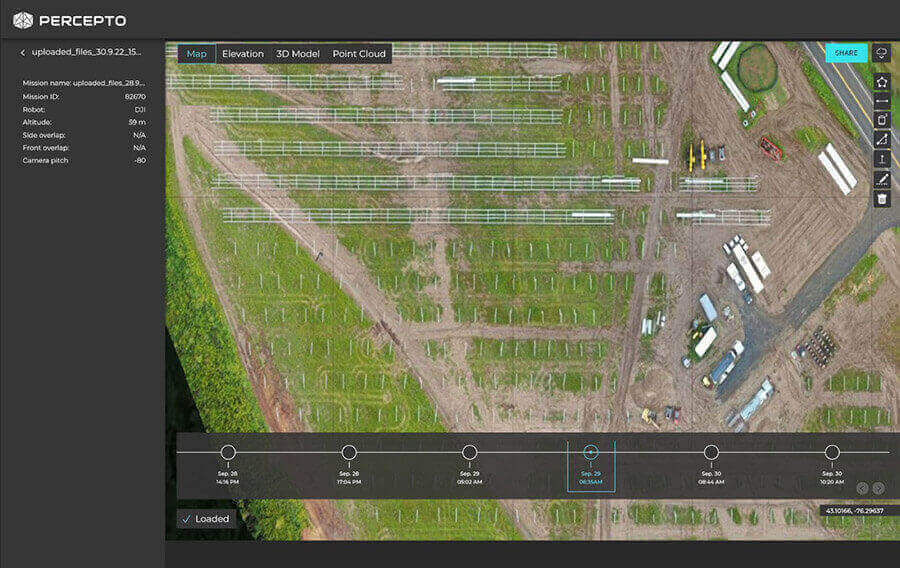 When construction is completed, drones scan the site and check if all panels are functioning correctly, giving the owners digital proof that everything was built properly, and allowing them to prove warranty if anything goes wrong in the future.

Recent regulatory advances, namely the first ever nationwide beyond visual line of sight (BVLOS) approval, make autonomous inspection technology more accessible than ever. While previously, the FAA required a certified drone pilot to have line of sight with a drone, Percepto operators now can launch an OGI inspection or construction monitoring flight remotely – without applying for FAA approval.

Autonomous technology is approved and readily available to meet the strict requirements of the new climate bill. Autonomous drone solutions can help solar companies accelerate construction in line with the bill’s incentives to expand solar production in the US. In addition,  it empowers Oil & Gas operators to reduce their costs, improve safety and efficiency, and reduce fines in the process.

Jackie Alkobi is Percepto’s Content Marketing Manager, and is responsible for the company’s content generation, management, and strategy. She joined the Percepto team in 2017, holds a BSc in Mechanical Engineering and a BA in International Relations from Lehigh University, and has extensive experience in the area of regulations for autonomous drones.