Home > Blog > How Drone-in-a-Box Tech Flies us into Industry 4.0

How Drone-in-a-Box Tech Flies us into Industry 4.0

What drives industries to push forward and embrace cutting-edge modernization? From economic trends and increased competition to tougher environmental and compliance legislation and a higher corporate responsibility, all these factors are demanding change. But there’s one element that advances a revolution the strongest: innovative breakthroughs.

We’re living in exciting times as the fourth industrial revolution is unfolding right before our very own eyes. Industrial revolutions have come in all shapes and sizes throughout history, from the steam engine powering the first major change in energy, followed by the electricity, gas and oil.

We then moved toward the third industrial revolution with the rise of electronics, internet, nuclear energy and biotechnology. Whereas the first industrial revolution was all about mechanization, Industry 4.0 features a push toward automation and cyber-physical systems that will replace many forms of human work altogether. 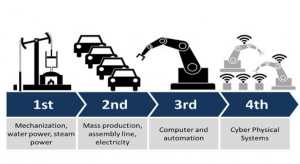 Industry 4.0 – where smart and autonomous systems are charged by data and artificial intelligence (AI) learning. It’s the rise of digital manufacturing, which is making a significant transition in the way we produce and consume products.

Leading the Industry 4.0 pack in digital manufacturing innovation are autonomous drones. Often called drones-in-a-box, autonomous drones fly directly ‘from the box to the skies’, without additional human piloting required. Autonomous drones use AI technology to operate entirely without pilot interaction, once their flight path is programmed in advance.

Piloted drones, on the other hand, require physical piloting to fly the drone. There are varying levels of piloted drones, and some have autonomous features such as the ‘follow me’ command, but ultimately, they require a human presence.

Aside from the obvious advantage of time management, autonomous drones are pushing industries to adapt new innovation in a variety of ways. Since they do not require pilot interaction, they are available 24/7, any day of the week. Autonomous drones are extremely easy to use, and occupy a small amount of space.

Autonomous drones are paving the way for aerial insights as an invaluable tool with tangible ROI. Autonomous drones, such as the Sparrow by Percepto, can perform multiple tasks during their flight route, thus reducing costs and increasing productivity. They are safe and developed by high performance systems that support any outdoor deployment and continuous operation.

They can easily be deployed for security, inspection and safety checks, which increases security and safety levels on site. In addition, frequent and consistent data collecting enables preventative site maintenance, allowing for a higher quality of maintenance planning, assets monitoring and faults investigation.

The introduction of autonomous drones significantly revolutionizes the way industrial companies operate. The contributions these drones bring to the Industry 4.0 revolution are pushing businesses into the modern world of technology and advancing innovation to the next level.

Autonomous drones are greatly influencing Industry 4.0, due in part to their usefulness and versatility within industrial sectors such as energy, transportation, engineering and more. With 72% of manufacturers expecting to be highly digitized by 2020, autonomous drone technology companies around the world have focused their efforts on software, hardware, and drone integration over the past few years. These new technologies and integrations allow companies to use new methods and existing tools to improve their current systems.

The contributions autonomous drones are making do not lie exclusively within the industrial zone. In South Africa, endangered species, such as rhinos, are being protected from poachers, as rangers monitor and record activity using these drones.

Employing features such as thermal imaging, vehicle tracking and monitoring perimeter fences, ensures that poaches aren’t illegally entering the area, and that suspects will be spotted before they have a chance of reaching the animals. With the success of this endeavour, this solution will be implemented in other national parks, to not only protect the rhino, but help conserve other endangered species as well.

Flying into the Future

As you can see, the benefits of using autonomous drones in the industrial industry, as well as other sectors, are extensive. From increasing productivity to making the workplace safer and more secure, conditions are changing – and for the better.

Transforming an entire industry is no small task, but companies like Percepto are taking Industry 4.0 by storm with their autonomous drone solution and multi-mission platform.

To learn more about how autonomous drones operate and are transforming industrial sites, contact us today.

Dor is a deeply knowledgeable commercial robotics industry expert passionate about autonomous technology. Co-founding Percepto in 2014, Dor led the company through tremendous growth and successfully led it to be the market leader of industrial autonomous drones. Following his vision the company created a new market category - autonomous inspection and monitoring solutions. Today, Percepto is the market leader in autonomous inspection and monitoring solutions, powered by robotics.